Have you ever found yourself chowing down on a KFC Double Down, thinking plaintively to yourself&mdash;is that all there is? Did you ever dream that the...

Have you ever found yourself chowing down on a KFC Double Down, thinking plaintively to yourself—is that all there is? Did you ever dream that the Yum Brands-owned franchise would break down the walls of the Double Down and push its meat-on-top-of-meat concept even further? Wait no longer: the word on the street is that there now exists a Double Down Dog.

What is a Double Down Dog? It’s exactly what it sounds like. The original KFC Double Down was at its core a bacon and cheese sandwich—albeit one that replaced the standard bun with two pieces of crispy boneless chicken filets fried in 11 original herbs and spices. In that same spirit, the Double Down Dog is a hot dog topped with cheese sauce, swapping out the traditional bread-based hot dog bun with a bun made of fried chicken.

So of course we’re salivating to get our hands on one of these majestic creations, but it eludes our grasp. Unfortunately the Double Down Dog is only available in the Philippines as a two-day promotion—through January 26 and 27, participating locations are offering Double Down Dogs in limited supply to only 50 hungry customers per day. So if you live near one of these 11 participating locations, you're in good shape (so to speak): 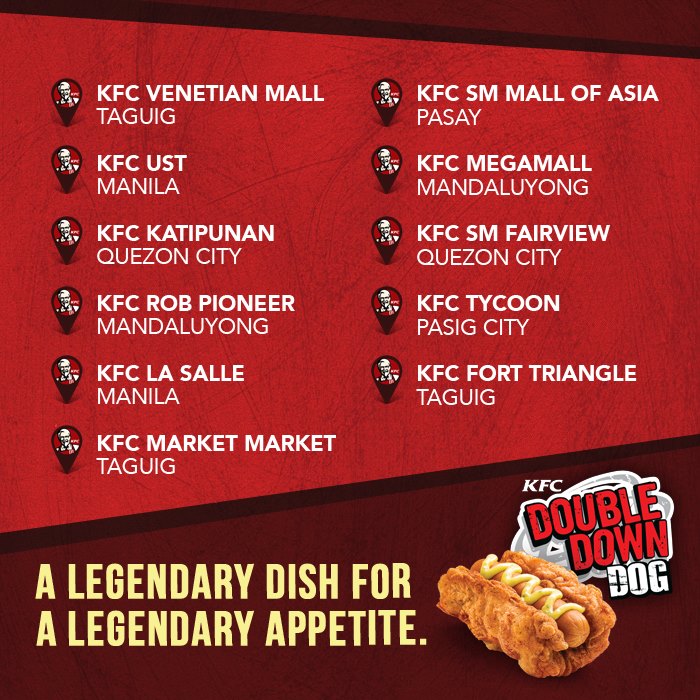 Maybe enough interest and the success of this promotion in the Philippines will prompt KFC to take this new concept worldwide. We’re keeping our fingers crossed.