Big Mac fans are passionate, especially about that super secret proprietary Big Mac Special Sauce. Now Australian fans are getting the first crack at taking a little bit of that sweet, sweet Special Sauce home with them: starting today, McDonald’s is selling 25ml containers of its Special Sauce for 50c AUD at locations across Australia while supplies last.

In an interview with the Daily Telegraph, McDonald’s Australia CMO Mark Lollback gave some insight on the promotion and how he hopes it will engage fans throughout the country:

“Big Mac sauce is one of the most iconic McDonald’s ingredients and people often ask us where they can buy it, so we’re excited to be the first country in the world to offer tubs of Big Mac sauce to our customers,” he said. “I know of people who love adding our special sauce to all types of food — from French Fries to McNuggets — so it’s going to be interesting to see what Aussies choose to add a spot of Big Mac sauce to over the next month.”

Need more than 25ml? We don’t blame you. For readers who aren’t versed in the metric system, that’s only a little under an ounce—or about as much as would come in a packet of McDonald’s dipping sauces for Chicken McNuggets. But if you want more, you’re going to have to be willing to shell out a lot more than just 50 cents. McDonald’s is producing 200 special and ultra exclusive 500ml bottles of Special Sauce, and the first one has been released this week as an eBay auction with proceeds going to Ronald McDonald House Charities. In his Daily Telegraph interview, Lollback noted that it would be “interesting to see how much people would be prepared to bid for the charity bottle” – and indeed, it is. With 8 days left to bid, the bottle is already up to $23,100 AUD: 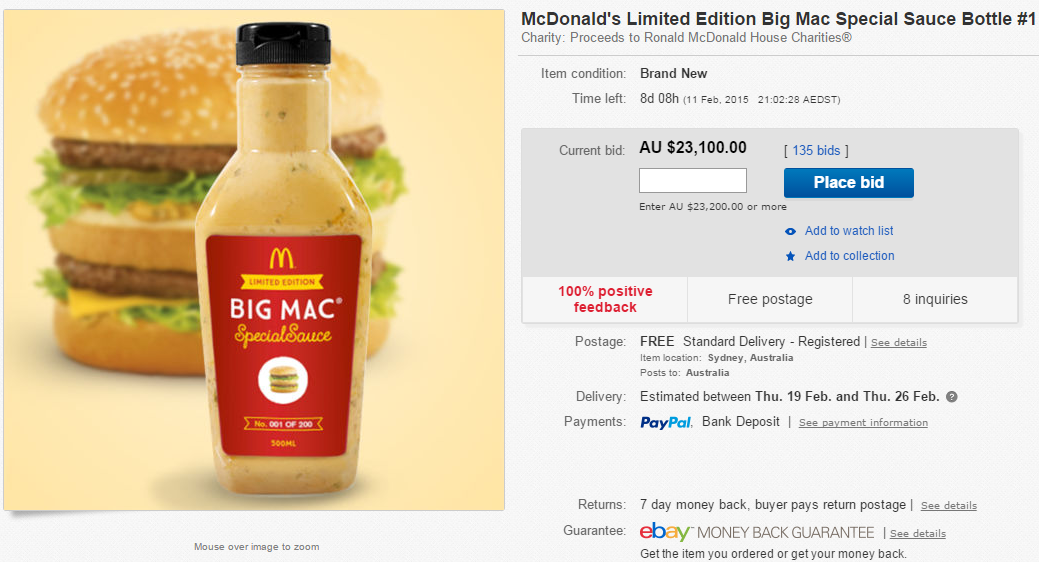 Unfortunately, McDonald’s has no designs (at least none that it’s stating right now) on making its Big Mac Special Sauce a regular retail item once its special bottles have been auctioned off. For now, all that Special Sauce fans can do is dream and hope that those 25ml packets stick around and get a worldwide release.