McDonalds Has a Brand New Bag

McDonalds is hoping that 2015 will be the year where everythings different&mdash;and because true change starts from within, McDonalds is jumpstarting i...

McDonald’s is hoping that 2015 will be the year where everything’s different—and because true change starts from within, McDonald’s is jumpstarting its year of success with the rollout of brand new takeout bags that show off a very different side of the fast food chain compared to the takeout bags it had last.

Whereas the last iteration of McDonald’s takeout bags were busy and vibrant, perhaps to the point of being jumbled, the new bag stands in stark contrast with a sleek minimalist design. On one side is a tastefully rendered cartoon burger; on the other side, the “I’m lovin it” slogan in large block letters flanked by the McDonald’s golden arches in the bottom corner. 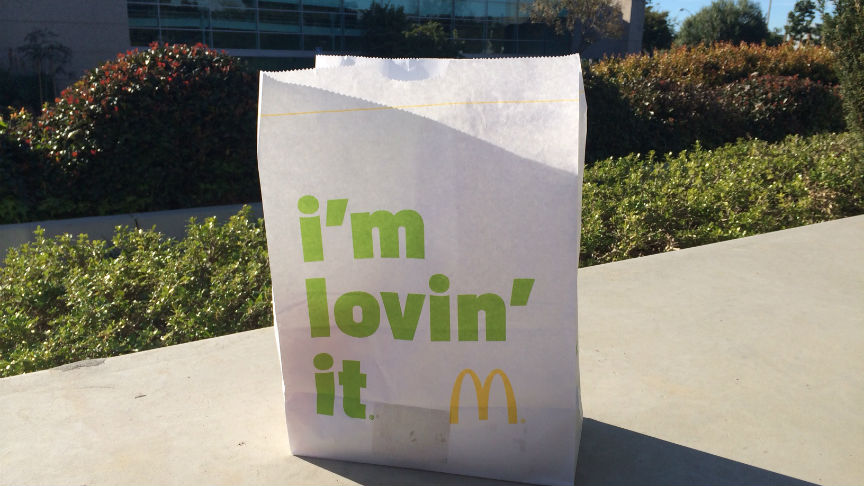 According to the Wall Street Journal blogs, the new packaging is inspired by a desire to highlight the slogan above all (there’s no time for hatin’ when the focus is on lovin’ it!) as well as a desire to be fresh and modern:

A McDonald’s spokeswoman on Friday said the packaging was designed with “a fresh, modern and simple look in mind, to highlight the playful icons that reflect some of our iconic menu items.” The bags also have messages on the narrow side, such as “The reason people smile when you say cheese” and “When life hands you onions, make a quarter pounder.”

Is that all there is to it? The WSJ points out another factor that could have played a major role in this takeout bag revamp for the New Year: McDonald’s needs to get a lot more in step with other fast food joints if it wants to curb its decline and get back on top. Bags at cult-favorite burger chains like Shake Shack and Smashburger offer takeaway bags with simple and striking designs, and McDonald’s needs to show that it can be just as on trend and visually desirable.

The biggest changes for McDonald’s to succeed in 2015 will probably have to—and are scheduled to—involve a revamp of the chain’s menu itself. But subtler changes like the bag are a nice complementing touch.