In 2000, Subway found a new spokesperson in Jared Fogle, an Indiana-based everyman who had claimed to lose over 200 lbs simply by living off of sandwich...

In 2000, Subway found a new spokesperson in Jared Fogle, an Indiana-based everyman who had claimed to lose over 200 lbs simply by living off of sandwiches from the Subway franchise location close to his apartment. But 15 years later, that partnership is over. In the wake of the FBI raid of Fogle’s home that took place today, Subway has officially cut ties.

Earlier today Subway removed the “Jared’s Journey” page detailing Fogle’s weight loss story from its website.  Subway then took to Facebook to make an official statement to fans of both the sandwich chain and its long-running spokesman:

Subway and Jared Fogle have mutually agreed to suspend their relationship due to the current investigation. Jared continues to cooperate with authorities and he expects no actions to be forthcoming. Both Jared and Subway agree that this was the appropriate step to take.

The sandwich chain also addressed the incident on Twitter 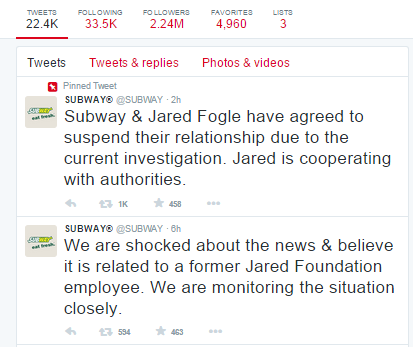 Over the course of his years as spokesperson for Subway, Fogle founded the Jared Foundation as a nonprofit organization with a stated mission to combat childhood obesity by helping children develop healthy eating and exercise habits at an early age. In April, Jared Foundation Executive Director Russell Taylor was arrested and charged with multiple counts of child pornography. While the Jared Foundation cut ties with Taylor after his arrest, it is believed that the investigation that triggered a raid of Fogle’s home is connected to Taylor’s previous arrest.

While Fogle eventually left during the raid by federal and state officials, which commenced at 6:30AM Tuesday morning and has included the removal of electronics and documents from the home, an attorney represented Fogle has asserted that his client is cooperating and has not been arrested or charged.

"Jared has been cooperating, and continues to cooperate, with law enforcement in their investigation of unspecified charges and looks forward to its conclusion," attorney Ron Elberger told USA Today in an email. "He has not been detained, arrested or charged with any crime or offense."