No matter how much a company and scientific experts insist, some urban legends continue to thrive. One of the most common ones is that Chicken McNuggets...

No matter how much a company and scientific experts insist, some urban legends continue to thrive. One of the most common ones is that Chicken McNuggets are made with everything from chicken eyes to chicken guts to chicken bones all ammoniated and mashed through an extruder into a thick paste that looks like this pervasive image (you know the one, but here it is anyway): 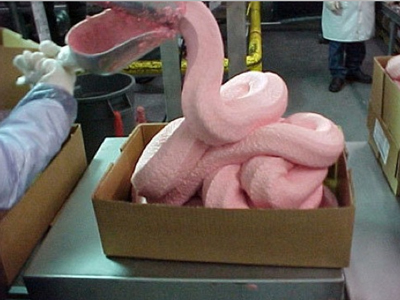 Snopes debunked that misconception of mechanically separated chicken years ago. But the belief carries on through chain letters and inflammatory blogs, making “what’s in a Chicken McNugget” one of the most frequently asked consumer questions at McDonald’s. So in the next installment of its “Our Food. Your Questions.” video series, the chain sent Grant Imahara back out on the case to visit a Tyson Chicken McNugget manufacturing facility and talk to Amy Steward, Principal Meat Scientist at Tyson Foods, while following the manufacturing process from start to finish.

So: what goes into a Chicken McNugget? It’s mostly chicken breast, chicken wing, and chicken tenderloin (though the skin is removed, it’s noted that some is added back in later for flavor).

Imahara then takes us through the grinding operation, which shows the white meat chicken coming out of an industrial grinder, looking nothing like the famous image—looking pretty much just as roughly ground as any portion of ground white meat chicken you’d buy at the grocery store to make meatballs.

Only this ground chicken is going to make McNuggets, not homemade meatballs, so the ground chicken makes its way next to an industrial mixer where it gets seasoned with things like salt, that chicken skin we talked about earlier, rosemary extract, modified food starch for texturing. The always mysterious “natural flavors” also make an appearance. But it’s not “because it tastes gross,” as the chain letter goes. It seems logical to infer that it’s because, well, who would make a meatball out of 100% unseasoned meat and expect it to taste good? Any restaurant chef or home cook would add seasonings to their meatballs, and in that context it seems ridiculous to hold a fast food chain banking on maximum comfort food flavors to a different standard.

Then the nuggets are formed and coated with batter and tempura breading, seasoned with celery and white pepper, par-cooked and flash frozen to be shipped off to McDonald’s locations nationwide. So that’s it—no beaks, no feet, nothing ground to a thick unrecognizable bubblegum pink paste.

It’s great that the brand is attempting to engage consumers by opening up the doors to its facilities and actively talking about these beliefs—there’s nothing like a wall of silence to make imaginations run wild, skewing toward the worst and most unsavory scenarios that imaginations can dream up. Now, with this side of the story out in the open, it’s up to consumers to choose who they are going to believe.